Early start for us all on Sunday 22nd September as we planned to be at the Southampton Science Park for 7am, to leave at half 7, and arrive at the event by about 9 for an official 10am start time.

All ready to go, we split into two cars, but unfortunately, one of Mark’s (Howarth) tyres gets a nail stuck in it. The car without the flat continues, while the car with the flat struggles to try and come up with a plan whilst broken down on Fareham roundabout.

All attempts at fixing the puncture fall flat, so Mark decides to abandon ship. The rest of us are figuring out how we can get a taxi to pick us up from a roundabout at 8 in the morning. Luckily, a police officer was driving past and noticed us at our troubled time. He offered to give us a lift to the nearest station (not back to the science park, unfortunately) so we could then get a taxi home. While this was going on with puncture car, the other car had a quick pit stop for a McDonald's breakfast.

Puncture car back at the Southampton Science Park and ready to set off again, and hour and a half after they originally got to the park.

Journey 2.0 all going smoothly, we all get a text to say people are running late due to traffic! Luckily, this didn’t affect us, and we finally arrived at the grounds to join the other half of our team.

The whole team is at the grounds, pumped and ready to go. A quick warm-up to get us ready for the obstacles we were about to endure, a quick roll around in the mud, and we were off!!

The first obstacle – Kiss of Mud. Having to army crawl over rocks and mud under barbed wire. Discovering the odd hair extension that had fell victim along the way. This really set the level of how intense this course was going to be. The first obstacle and I was covered in bruises and cuts. Next was Overtired – a tyre wall where any upper body strength comes in useful. Unfortunately, I have none. However, I am tall so had that on my side unlike Rachel (Clements), so managed to get over the wall slightly easier.

Third – Devil’s Beard. This wasn’t that memorable; I only really remember a heavy rope net over the top of me!

Fourth – Everest. This was where the teamwork really started. Essentially a mud and rain-soaked halfpipe that you had to run vertically up. A few of the shorter people struggled with this one as you did need speed and height to get up in one go. Rachel was the last to go, and with the help of the rest of the team pulling her up and over, she made it! (with a few burns to her stomach after sliding down a couple of times). 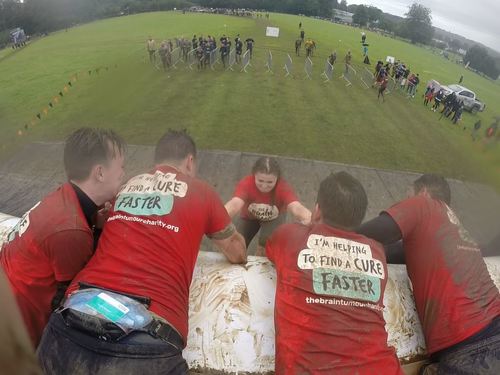 The next course of obstacles seemed more a bit of fun than challenging. For Texas Hold’em, you had to balance on a large triangle beam and sidestep down, whilst holding hands with a teammate. Balance and synchronisation were key! Which myself and Rachel failed at.  After this was 'hold your wood', where you literally had to carry a tree trunk around a corner.

Mudmile next – the halfway point. Climbing up and over mud peaks and splashing down into waterfilled troughs, however, a massive pick me up for everyone running on the day. Music blaring and a Tough Mudder spokesperson on a megaphone shouting enthusiasm and positive comments at everyone running past. This did not feel like an obstacle at all, and let's be honest, by this point you’re covered in mud so really don’t care anymore! 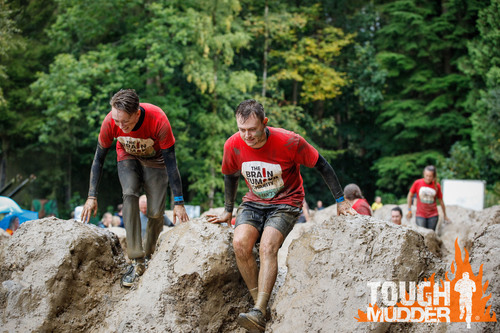 Pyramid scheme next – you can ask anyone from the day, this was the toughest obstacle by FAR. A slope that you could no chance run-up, but instead have to use your team to lay on the slope, building a pyramid, so you can climb up them. There were then various members of other teams at the top helping to pull you up and over. It sounds simple enough, but this took us the most time out of the whole day. We tried, we almost had it, then a team next to us would slide down and take us out with them. We tried again, we almost had it again, and then the same thing happened. We almost gave up and moved to the easier version of the wall, but then decided to give it a few more goes. The team members at the base of the pyramid were struggling as people climbed up them; there were feet on shoulders and knees, hands in awkward positions, but we eventually made it all up.

Spread Eagle – I cannot imagine anyone felt comfortable doing this one as the positioning of it made you feel slightly exposed. Having to manoeuvre yourself over two slacklines to avoid falling in the water below. Not the most graceful, and definitely a few friction burns received. Block Ness Monster – Essentially having to hold on to one side of an oversized Toblerone while people on the other side help roll it over. You would slide down the side of it and go face first into the muddy water, but it was great fun! One giant cube, then another giant Toblerone, and we were done. Lots of smiles on this challenge. 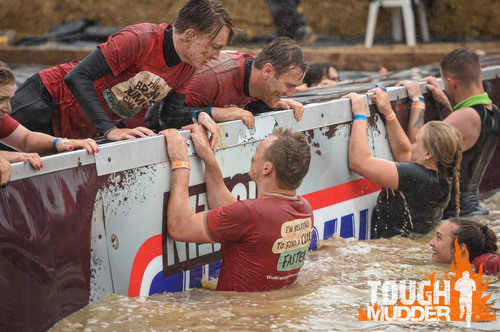 There was also a Hero Carry for the 5K runners at the end of this, where you had to give your teammate a piggyback one way, and then they give you one the way back. There were a lot of tired little legs at this point.

Mudderhorn – a very very very high rope climb. To start this, you would need a leg up from your teammate as the starting bit was quite high. It was a nice one to take your time on near the end, as by this point, we were all knackered!

Finally, Pitfall – a trench filled with mud and water, with the occasional deeper hole for you to fall down. A great last obstacle (if you can even call it that!) 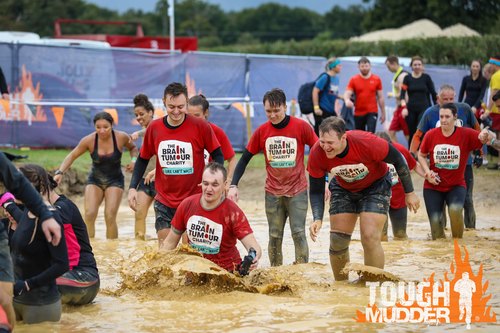 BONUS OBSTACLE all of us bar Rachel went around and did the Electro Shock – running through the mud with a few haystacks as obstacles whilst trying and failing to avoid handing electric zappers! A massive adrenaline rush to finish on before crossing the official finish line together.

Tough Mudder was so much harder than I initially thought it would be, but it was great having a team around to help me through. Not just at the obstacles, but when I needed to stop running to catch my breath, or needed a bit of extra motivation that I could do a task. I’m so proud we all tackled each obstacle and didn’t give up or take the easier option on any of them.