One of our many rewards includes an annual, all expenses paid, trip away. See the 2014 trip from Mark's eyes in his story below, and find out more about the rewards on our Join Our Team page.

Cancun… The land of sun, sea, tequila and, in my case, sunburn.

Setting off from Gatwick on a cold and wet Tuesday morning is always exciting, knowing that you are leaving the dreariness of the UK and swapping it for the blazing hot sunshine of Mexico.

The usual flight ritual was kept to without fail and if you are not aware then it involves dealing with a long flight by consuming as much alcohol as possible whilst still trying to convince the rather patient air stewardess that we are not drunk and of course another drink is a good idea.

We stumbled from the plane into the all-consuming heat and humidity of Mexico and into Cancun airport where we managed to get through security with no fuss, into to a taxi and onwards to our hotel, The Paradisus Cancun.

The hotel was on the main strip in Cancun and was absolutely sprawling in every conceivable way. After a brief tour, there was not much left to do except dump our bags, grab a bite to eat in one of the many restaurants on the hotel complex, then get straight back out and start to experience some of the nightlife in Cancun.

It was at this point that we discovered that it was Spring Break for a number of the college kids in America and they too had descended into Mexico and have their week of partying. One or two more gins, vodkas, a couple of cheeky beers and tequilas may have been drunk…

The next day started early, which is always an issue with jet lag. After three hours sleep, there was nothing better to do at 06:00 than go for a run in the morning sun. Breakfast afterwards with a few bleary-eyed colleagues and then onto the first activity. Golf.

Now I don’t really play golf (I’m about a lesson two – I know how to hold a golf club) so imagine my surprise when I actually managed to get hold of the first ball I hit, sending it flying over the road near the hotel and narrowly avoiding an oncoming bus. After this there were golf clubs that flew through the air into nearby ponds, some seriously good shots (none of which were mine) and the gold champion of the holiday was decided (well done Dan).

The rest of the day involved lounging by the pool, losing sunglasses and swimming in the sea. This was followed by a more relaxed dinner involving some fantastic steaks and red wine.

After a rather more chilled day yesterday, today’s activities were supposed to be slightly more energetic with a day out on the race track.

A gleaming white Audi R8 awaited us, which at this point didn’t have a single scratch on it. We each had 15 minutes to set the fastest lap and the competitive streak might have come out. Any slight knock on roadside cones came with a financial penalty so whilst you tried to fully make use of the track you were always aware of exactly where the boundaries were. 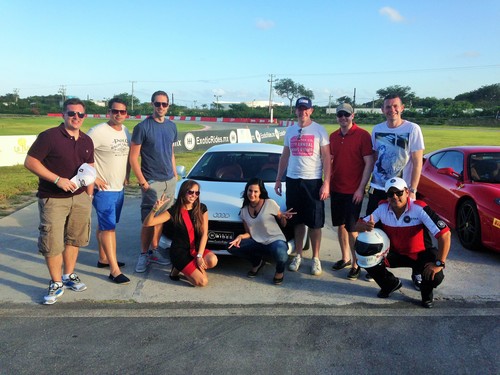 Back to the hotel for a quick dinner before checking out one of the best clubs in Cancun, the fantastic Coco Bongos. The club had everything and it wasn’t long before we were partying till the early hours.

Finally managing to have a decent night’s sleep (bye-bye jet lag) and the day was spent chilling out max and relaxing all cool by the beach, finding lost sunglasses on some random Americans head and taking the occasional dip in the sea.

The start of the evening was spent in the a la carte restaurant and a very opulent 7-course meal. We had wine that matched every course and port that finished everything off with a bang. As this was also the last night, it only seemed fair to head back into central Cancun and carry on exactly how we started. In a club, partying hard, just this time with more energy.

And onto the final day of the trip before the flight home in the late afternoon. Feeling just as knackered as when we arrived but with a big grin knowing the last few days had been ones that would never been forgotten, no matter how much we drank!

Maybe one more Cerveza though?