Every quarter we recognise and reward our highest achievers at Spectrum IT Recruitment. This started as a luxury meal, giving it the name 'Lunch for Legends'. It has since developed into a variety of rewards but the name has stuck. Check out my story of the 2015 QTR2 Lunch for Legends reward at Glorious Goodwood.

It Started With Champagne…

Spectrum IT are well known for treating their employees and rewarding hard workers. The reward this quarter was Glorious Goodwood races; and glorious it was. 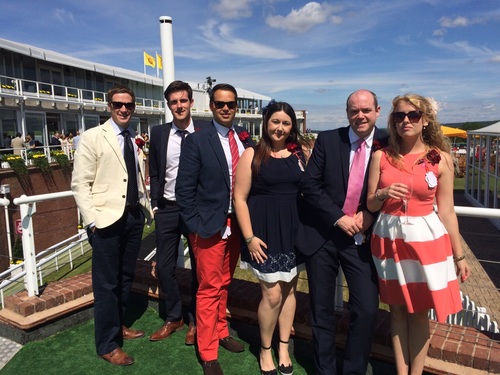 Throughout the journey to Chichester the atmosphere was in full force. It may have been early, but we were dressed up, and ready for an outstanding day. When we arrived, we were guided to our VIP area where we were welcomed by champagne and sunshine.

It was time to talk tactics and place some bets, so all eyes went to the regular race goers for tips. Those in the know knew that Richard Hughes was retiring at the end of the day, so his determination to finish on a win made him a worthy bet. The debate was if the legendary Frankie Dettori would take all the success. After much debate, tip finding and picking of comical horse names, the bets were set.

The champagne was flowing rapidly, so it was the perfect time to sit down for a three course meal. Platters of food were spread across multiple tables, so needless to say we all had seconds, at least.

After dessert, we headed to watch the first race next to the finish line. This was the prime place for Dan to watch Frankie Dettori win him £60. I can confirm that Dan’s victorious fist pump was spectacular.

After a cheeky drink and another dabble at the desserts, we headed to our reserved seats to watch the second race. Another win among the group kept spirits high, and it continued this way throughout the day.

As the sun went down, so did our ability to take clear and sensible photos; which was amusing to flick through the next morning. Thanks to Spectrum IT, and my fellow Spectrobots (aka colleagues) for a brilliant day. It could not have gone any better; well perhaps just a little more luck on our sweepstake!