Every quarter we recognise and reward our highest achievers at Spectrum IT Recruitment. This started as a luxury meal, giving it the name 'Lunch for Legends'. It has since developed into a variety of rewards but the name has stuck. Check out Matt's story of the 2015 QTR3 Lunch for Legends reward to the Rugby World Cup.

The day activities started with each Spectrobot getting together as the train travelled through Hampshire and into Clapham Junction.  In typical celebratory style a few beers were consumed before and during the train journey!!  As the team got to Clapham Junction, the team got together to face the joyful hordes of people looking to make the same journey towards the ground where they can watch their countries success.

As the train pulled into Richmond, we were met by walls of ‘rugby madness’ as what seemed like the entire world had turned out to watch the big match or to squeeze into the local bars to watch their own countries.  We then made our way to The Orange Tree where we bundled our way through the squashed bar and into a more relaxed restaurant area for a decent meal. Some photo frame fun before the match kicked off.

Whilst waiting for the food, the sweepstake was completed for the match. Now everyone knew when they wanted the first tries or penalties scored in each half.  After a few beers, some red wine, some Jaegers and of course food, we made our way to Twickenham Stadium via organised buses, where we had the pleasure of meeting a Rolf Harris lookalike and a Australian version of half of the Hairy Bikers.  Due to this encounter, #banter began and we were all on our merry way to watch one of Rugby’s greatest World Cup pool games and with some high expectations.

After joining in some English vs Australian sing-alongs, the bus arrived outside the ground so we departed and entered the concourse to enjoy a couple more beers, a few special photo opportunities and some more #banter with the ‘enemy’! 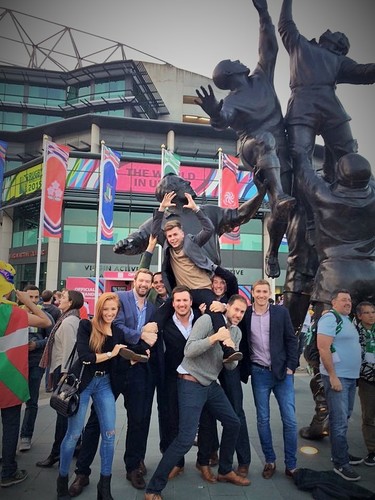 The time came to make our way to our seats where we then experienced the entrance of the teams, the national anthems and joined in the with the famous “Swing Low, Sweet Chariot” to get behind the almighty England.

Unfortunately as time went on during the first half, the tension increased as the Spectrobots watched Australia push to a 17-3 lead.  A couple of cheers erupted out of the group, mainly as people realised that they still had some sweepstake winnings to come, but they were soon quietened.  Anyhow, it was half time – and so time for a couple more beers! As the second half got under way, we carried on the cheerfulness with further singing and shouting to get behind England.  Australia started strong again by scoring another penalty, but they weren’t strong enough as England scored a try. This brought the Spectrobots to erupt with joy followed by the conversation and then a penalty to bring it to 20-13.  Was this our time?  Were the Spectrobots the lucky charm the English team needed?   Eh, no...

Australia* went on to win the match 33-13.  The Spectrum IT winners felt nothing like winners.  We dispersed back onto the buses outside, (bumping into a rather cheerful Rolf and Hair Biker again) to make our way to the train station and head home…

All things considered, everyone had a thoroughly enjoyable time. I am sure everyone would do it all over again, but maybe if it was England vs Ireland.