One of our many rewards includes an annual, all expenses paid, trip away. See the 2016 trip from Phil's eyes in his story below, and find out more about the rewards on our Join Our Team page.

It all started on a wet and windy Friday morning at Southampton airport where we met for the 2016 Winner’s Trip to Dublin. With it being such an early start it meant no queues so straight through check in, security and then to the bar for a well-earned alcoholic beverage and bite to eat before the flight.

After a rocky landing with the high winds we arrived safely. After a quick change, we found the nearest taxi rank and made tracks to the hotel. An interesting chap the taxi driver, very insightful and knowledgeable (did you know Dublin has more taxis than New York City - very educational). I couldn't get over how popular he was, as we meandered through the city we stopped on numerous occasions, albeit due to traffic congestion mostly, but each time the window came down, he would start a casual conversation with locals and they would discuss anything and everything. I came to the conclusion that he was either famous or the Irish really are the friendliest nation.

We arrived at the Double Tree Hilton Hotel, situated a short walk from the heart of Dublin’s beautiful city centre.Unable to check in, we dropped our luggage off and took the opportunity to venture out and explore the city.

Once we had finished our Guinness in a traditional Irish pub, we headed off to a famous award winning steak house, F.X. Buckley’s. The waiter approached the table with a plaque displaying all the different cuts of meat, explaining each one individually and how they are best cooked. Tough decisions to be made but we all decided and placed our orders. It's safe to say we weren't left disappointed. The best steak I have ever tasted! 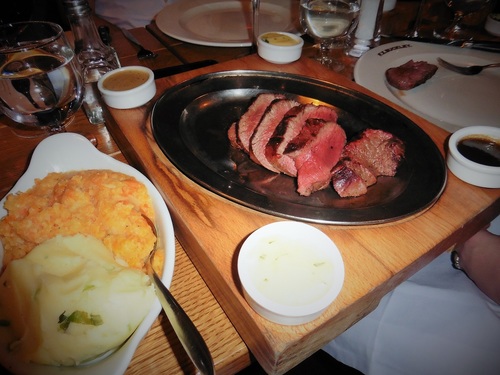 At this point, I should mention we were joined by the newest addition to the team, Irish Paul, who was born and living in Dublin at the time. This made him designated Tour Guide for the next stage; the pub crawl. It is also worth mentioning that he had supplied a full itinerary. He led the high-spirited troops out of the restaurant and on to our next destination. 10 to 15 minutes had past and conversations were in full flow amongst everyone whilst walking through the city, and we came across a familiar sight. We were walking past Buckley’s where we had lunch! One too many glasses of red at lunch for Irish Paul! The rest of the crawl was made easier once reaching our first stop due to the pubs being in close proximity of one another, meaning we didn't require our human sat nav for directions. The rest of the afternoon was spent enjoying the Irish pub culture and ensuring we stayed hydrated before returning to the hotel to check in. 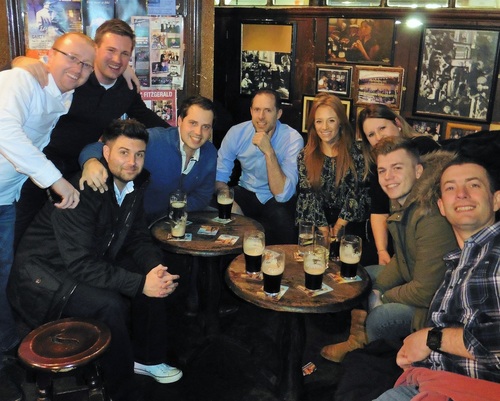 No rest for the wicked. No sooner had we returned to the hotel from the pub crawl, we were heading back out for dinner. We had just enough time to check in, shower and change before meeting in the hotel bar to disperse to BadBobs. Based in Temple bar, it had 5 floors, each with its own unique atmosphere. Starting off with dinner, we enjoyed an American-style cuisine, which was to everyone's delight following the afternoon’s session. Finding a second wind, we headed upstairs where we had a table reserved with numerous bottles of spirits and mixers. As the evening continued into the early hours we enjoyed shots, jaeger bombs and throwing a few shapes before the time came to make our way back to the hotel. As we jumped in the taxi, it was suggested fast food was needed  to round the night off (I'm not really sure why after all the food). After politely asking the taxi driver, we swung by Burger King, where at this point we decided to buy the driver food for his troubles. Well I think we made his year as I've never seen a happier man receiving some fries (sharing is caring). Finally returning to the hotel, day 1 was complete and it was time to hit the sack for a well-earned snooze.

After breakfast an the hotel, it was time to make our way to the famous Guinness factory. The brewery that tells the story of Ireland's famous beer. One of our squad had picked up an injury after yesterday's antics (injured foot) so half the squad jumped in a taxi and the other half took advantage of the fresh air and a 45-minute walk. Once we finished exploring the brewery, we ended up on the panoramic roof terrace which has incredible views over Dublin. We departed the factory once we picked up our memorabilia; personalised Guinness pint glasses. We enjoyed a civilised afternoon, grabbing lunch whilst watching the football, then headed back to the hotel to rest up and power-nap, before the evening’s shenanigans. 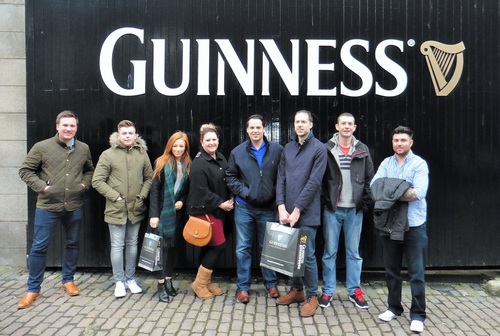 Feeling refreshed with a new lease of life we headed out in the early evening to a Thai and Asian cuisine restaurant called Red Torch Ginger. After a delicious meal, we headed for Dublin's biggest and best nightclub Copper Face Jacks. In true style we made a pitstop on route. From the outside we assumed we were entering an ordinary bar but making our way from front to back we realised we were in, what could only be described as....... Ayia Napa! An outside terrace bar with a real holiday atmosphere. The night wore on and we staggered to Coppers where plenty more fluids were consumed before we called it a night (ordering a dominoes pizza delivery to greet us on our return).

Sadly I was unable to join the few that made it down for breakfast in the morning. With it being the last day I rose from the pit, showered and packed my luggage in preparation of checking out. After all this effort, my colleague returned to the room and reminded me that we didn’t need to check out for over an hour. Once checked out we headed to the Fire Restaurant at Mansion House and enjoyed a mouthwatering Sunday Lunch before flying back to Southampton.

One phrase that sums up the 2016 winner’s trip to Dublin would be “dece, real dece”! [Dece. Short for Decent.]