The South Coast Tech Awards 2020 will stand out as an awards to remember for very different reasons. For the first time, the awards were hosted online as a virtual event, due to the ongoing coronavirus pandemic. It was also Spectrum IT’s first time as headline sponsors of the business awards, which recognise innovation and enterprise in the regional tech industry.

This year’s impressive line-up of finalists represented the breadth of creativity and experience of forward-thinking businesses in the south. Peter Laurie, head of client relations at The Business Magazine, said: “The finalists range across the whole arena of tech – from start-ups and scale-ups, to very well-established businesses.”

There’s no doubt that 2020 has proved a tough year for the tech industry, as with all industries, with a lot of uncertainty and necessary changes. However, the awards were a celebration of success in the face of adversity. Businesses across the region have found ways to adapt and even thrive in the ‘new normal’, while continuing to be innovative.

This year’s awards were hosted by television presenter and computer scientist, Spencer Kelly on 7th October 2020. As presenter of the BBC’s international technology programme, Click, Spencer has himself had to change the way he works in the current climate. During the awards ceremony, he explained how he had been presenting the programme from home during the lockdown period in the UK.

Director of Spectrum IT, Steve Wright, presented one of the awards at the virtual event. He shared his thoughts on the new format: “It was a shame the awards couldn’t take place as planned, but the team did a great job of moving everything online. The event went smoothly, and there were no technical glitches. The host did a great job of keeping people engaged and including the networking side in the presenting.” 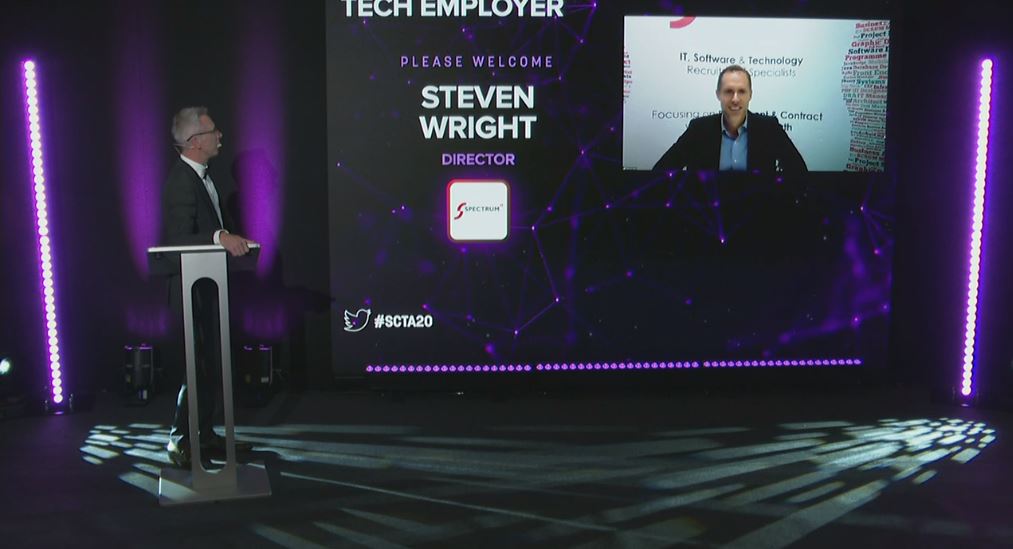 The event included the opportunity to network both before and after the awards ceremony, giving guests and sponsors the chance to connect. There was also a live comments board, which added an interactive element to the evening.

During the event, there was the opportunity to fundraise for the Wetwheels Foundation. The charity provides opportunities for disabled people, in particular those with profound and complex disabilities, to access the sea in a safe, stimulating and rewarding way on board custom-built, fully accessible powerboats.

The awards themselves were presented to the best and brightest tech businesses. The Tech Start-Up Award went to CanSense, which is working towards early detection of bowel cancer through cutting-edge technologies. Adam Bryant, CEO of CanSense, said of the award: “Being recognised in this way is very important to the team. Winning acknowledges that, as a team, we are doing our small part in the fight against cancer.”

Spectrum IT sponsored the Tech Employer award, which was won by Onecom, an independent business telecoms provider. CEO Darren Ridge commented: “We know that Onecom is a great place to work, and we’re not shy of saying so – but it’s wonderful to have that recognised by others. We’re very proud to have received this award and to have received such positive feedback from the judges.” All of the winners and Highly Commended finalists can be viewed here.

The virtual South Coast Tech Awards 2020 was certainly not how Spectrum IT hoped to make its debut as headline sponsors of this important industry event, but we’re already looking forward to next year – and hopefully attending in person!